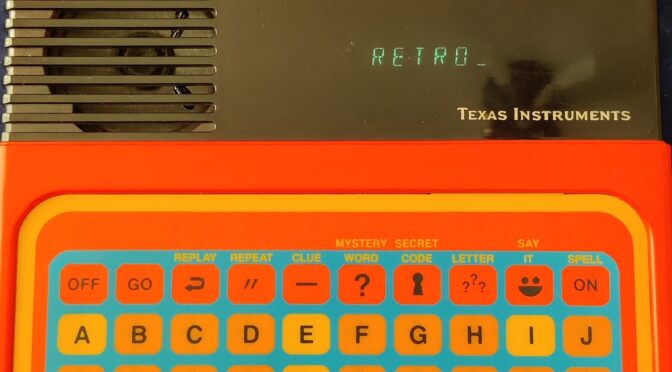 Many of the readers of this post may be familiar with the Hollywood movie E.T. (The Extra-Terrestrial), in our regions in the translated version: “E.T. – Der Außerirdische”.

At least the older readers will know him. The film was shown in our cinemas in 1982 and I had the opportunity to see it at the time. As a child, you (at least I) always immersed yourself in the stories and lived in them. Briefly told, the story follows a small alien who was accidentally left behind on Earth while his fellow aliens flew away in their spaceship, fleeing from government agents. So little E.T. in a shed where he was found by local children. They befriended him and helped him contact the spaceship. To do this, he constructed a kind of radio system from everyday objects. For example, the antenna consisted of an umbrella, a record player with a circular saw blade, a clothes hanger with a dinner fork, and a child’s toy that could produce synthetic voices. This toy is called “Speak & Spell” and was developed by the Texas Instruments company. The Speak & Spell is a handheld children’s computer from TI (Texas Instruments) that consists of a keyboard, a display and a small speaker. The heart of the device is a speech synthesizer IC, which makes it possible to generate an artificial voice. An audio output similar to the human speaking voice is achieved via LPC (linear predictive coding). With an internal ROM and optionally also external ROM modules, various tasks (spelling, word guessing games, etc.) can be realized. Selection and entry are made via a keyboard. The Speak & Spell children’s computer originally came from a three-part toy series with “talking” computers. There was also a Speak & Math and a Speak & Read. You can occasionally find collectors presenting their devices on online video platforms. The devices were initially sold in the USA, Great Britain and Japan. Depending on the country of delivery, there were also different ROM modules with mini-games such as Mystery Word, Letter or Secret Code. These computers were intended for children from the age of 7. Later, more language libraries were released in seven language variations. Among other things, there is said to have been a module for the German language. The first Speak & Spell was introduced at the 1978 Consumer Electronics Show as one of the first portable devices with a visual display and pluggable ROM game cartridges. This model was also used in the film E.T. known. It differs from later generations of devices only in terms of the keyboard, which in the original version still consisted of “real” keys. The TMC0280 synthesizer chip works inside. This was developed by a small team of engineers under Paul Breedlove † (1941-2021), engineer at Texas Instruments in the late 1970’s. This development began in 1976 as a result of TI research on speech synthesis. At the beginning of the 1980s, a revised version of the device came onto the market. Here the keys have been replaced by a membrane keyboard. A Speak & Spell Compact version has also been released. In this case, the optical VFD display has been dispensed with and the size has been halved. There was another edition in the late 1980s. This time the VFD was replaced by an LC display and the keyboard got a QWERTY layout. As part of the retro wave (my guess) the company “Basic Fun” brought the classic Speak&Spell back onto the market in 2019. It looks similar to the 80s version, but is technically up to date (everything is generated in a small chip that was bonded directly to the “mini board”). The version also no longer has connections to the outside world. The following chips are installed on the mainboard of the version sold before 1980: The model that is in my collection is one of the versions sold after 1980. The following ICs are installed here:

The VF-display has eight digits with 14 segments each. The supply voltage of 6V is obtained from four C-cells connected in series. The 9V and 21V for the supply of the VFD and microcontroller is provided by a discretely constructed DC/DC converter, which is located on its own circuit board. The membrane keyboard is plugged into a 13-pin Flexiprint socket. There is a small speaker for playing the sound, or you can connect headphones via a 3.5mm jack. The sound is obtained directly from the synthesizer chip. In order to adjust the output impedance to the speaker, a small audio transformer has been installed right next to the jack socket. Another socket serves as an external power supply. A trimming potentiometer changes the playback speed/pitch of the audio output. The TMC0280, later called the TMS5100, is the single chip speech synthesizer that used a 10th order LPC model using pipelined electronic DSP logic. The phoneme data for the spoken words are stored in PMOS ROMs. The enormous capacity of 128 Kbit was the largest ROM that was still affordable at the time. Additional memory module cassettes can be inserted via a recess in the battery compartment. The contents of the memory modules can be selected using a key on the keyboard. The data rate of the audio output is slightly less than 1kbit per second.