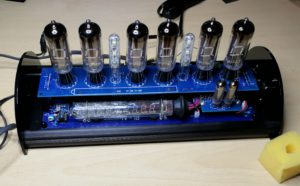 It is a clock with Type IV-11 vacuum fluorescent display tubes for hours, minutes and seconds, and an IV-18 tube for date display, and IV-3 for displaying the day of the week. The clock consists of a mainboard with power supply, CPU, MP3 module and driver blocks for the tubes. The time is set and synchronized via an externally connected DCF-77 receiver. Later, the board will be extended with a real-time clock circuit. The power supply for the entire circuit comes from a small plug-in power supply with 12V / 1.2A. The total power consumption is about 450mA. As a special feature, the clock has a small MP3 sound module with MicroSD card slot. This receives from the microcontroller via the serial interface every quarter of an hour a corresponding command to play an MP3 file. Thus the quarter of an hour is signaled with a “gong beat”, half an hour with two and three quarters of an hour with three “gong strikes”. At the full hour, the corresponding time is announced.