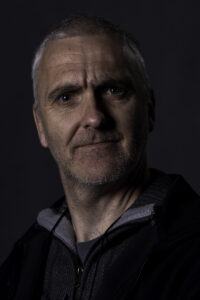 I saw the light of day at the beginning of the seventies as the son of an official in the controlling and economic area and a secretary/housewife. I was fascinated by technology very early on. Everything that moved or glowed in any form immediately caught my attention and the urge to explore. Unfortunately not always to the delight of my parents, because I ALWAYS had to know what’s inside. And so, unfortunately, many a device or toy ended prematurely. Fortunately, my parents supported me as much as they could. So I was confronted with the first electronics experiment kits at an early age and dealt with them in detail.

But also everything mechanical was not spared from me. For example, at elementary school age there was already the opportunity to pick up an old car engine from a nearby “scrap dump” with friends from the neighborhood. We dragged this painstakingly into the garage of our parents’ house and began to dismantle everything. Remove pistons and valves, take apart the gearbox. We gained a lot of experience (especially that you should drain the oil beforehand – would have saved me a lot of trouble with my parents). Every bulky waste disposal filled my children’s room with parts from old television receivers and radios.

So it was almost logical that I would do my apprenticeship in the technical field and after completing compulsory school I completed the HTL. During this time, an interest in television technology and production developed and began working in public broadcasting before and after my military service. The activities there did not challenge me as expected and an ascent was unthinkable without “vitamin B”. So I changed my field of activity and went into the private sector, where I worked with industrial electronics in the development of electronic devices and was also active in the associated service technology sector. I was able to continue to operate the video and television technology from the productive side with a very good friend † and produce some documentary films, image films and also some live events as an EB cameraman, etc.

During and after the economic crisis of 2000, my professional career changed and in 2005, after a chance conversation with an old colleague, I switched to the “Research Associate” department at the University of Applied Sciences and worked there on research projects in the field of electronics.

Since I still deal with the technical things in my private life and also stumble over the many things from my youth (especially when rummaging in the basement of my parents’ house) I decided to create this blog here and am now trying to describe and archive things here a little. A lot is unfortunately forgotten and so I would like to use this platform to save the activities and memories of the last few years.