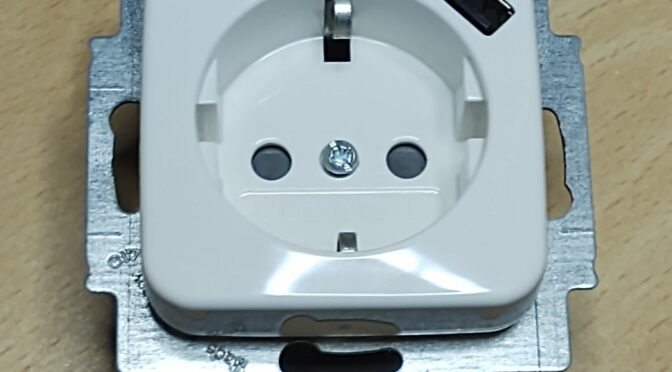 Thanks to the USB standard, it is now easy to operate or charge your mobile phones, tablets, Arduinos, Raspberry PIs, toothbrushes, power banks, etc., etc., with one and the same charging adapter or plug-in power supply. The “plug-in power supply” is an AC / DC converter which, ideally, electrically isolates the mains side with the 240VAC / 50Hz from the low-voltage direct voltage side in compliance with the applicable regulations. The low-voltage side provides the 5VDC via a USB-A socket. Depending on the model and origin, maximum currents of 1A up to approx. 2A can be taken.

Due to the large number of USB-powered devices in households, there are also quite a few of these plug-in power supplies. In order to operate the plug-in power supply, you naturally also need a socket in the house installation in order to connect the power supply to the utility grid. If several USB devices are in operation, or better – in charging mode, some of the sockets in the household are quickly occupied and the power supply for more important devices such as coffee machines and the like is missing …

Some manufacturers came up with the idea of ​​integrating a USB-compliant power supply unit with a corresponding USB socket into a Schuko socket that was designed for installation in a wall outlet, without losing the space for the Schuko socket.

These sockets with integrated USB power supplies are nothing new and have therefore been on the market for several years. Of course, I also had to install such sockets at the time, because they are really extremely practical. So – now, of course, the years have passed and the service life of the power supplies built into the sockets is coming to an end and they will fail. More precisely, they no longer provide a 5V supply.

However, since I don’t throw everything away and replace it with new ones – the sockets were also expensive at the time – my plan was to look for the fault and repair them if possible. In this case it is a Busch-Jaeger socket of the type 20EUCBUSB-214-500 which now refuses to function. The power supply unit should require approx. 100mW in standby mode and with 5VCD it can deliver a maximum current of 700mA.

After removing the socket, it was also quickly dismantled. The plastic cover attached to the rear is held in place on the opposite side by means of locking lugs. Now a circuit board came out that can be easily pulled out. The contact to the network side and also to the USB socket is realized via spring contact pins. It should be mentioned right away – they fall out quickly. That is why you should always work the socket with the back facing up. This saves you the hassle of searching for the little pens.

When the board was now released from its housing, at least one problem was revealed, which explains the failure of the power supply. A small chip on the board had a hole that definitely doesn’t belong there. The components surrounding it also showed traces of smoke. Thanks to another functioning socket of this series, I was able to identify the IC.

It is a Link Switch-II series LNK614DG from PowerIntegrations. It is a small ALL-IN-ONE IC that has integrated the power FET, the oscillator and the control via a feedback winding of the transformer. The power rating according to the data sheet is 3.5W installed in a closed housing and 4.1W in an open frame or ventilated state.

The chip therefore only needs a few peripheral components, which in this case also makes it easier to search for further errors. On the network side, only the AC rectification and smoothing as well as the line filtering are necessary. These components were in top condition and worked. Then there is only the transformer with its primary, secondary and feedback winding, the secondary rectification and smoothing and a few resistors that are connected as a divider. No fault was found with any of these components. So – who dares wins – the IC ordered and exchanged – and bingo – the 5V are back at the exit and can also be loaded.