Now a new fuse is still missing in the board. After installing and checking the other components in the affected circuits, the next function test was started. All boards electrically connected again and 6V connected to the battery terminals – and look – the Powersupply board starts up and the voltages are there. Now the GV8E can be switched on again with the power button, the LED also lights up and a quiet noise can be heard from the loudspeaker. However, none of the drive motors are running and the LCD monitor remains dark. The LED lights up briefly when the „Ejekt“ button is pressed, but the motor responsible for ejecting the cassette compartment does not start. That means -> continue searching for errors. First of all I will take a look at the LCD monitor. It is quickly removed and dismantled. All the less pleasing is the condition of the board. Here the „decaying“ electrolytic capacitors raged with their „body fluids“. (Of course this means the electrolytes)

After this procedure the time had come. The next function test started. After reconnecting all plug connections and the power supply, there were further signs of life. The backlight (CCFL) started again and in the upper left corner it was „00:00“ to see the flashing clock of the on-screen display … Unfortunately, that was all. The OSD display was very blurry and the rest of the picture was white. The brightness controls did not respond. So the board had to be examined „big“. 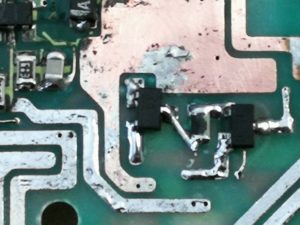 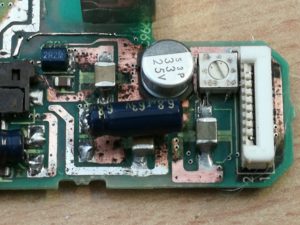 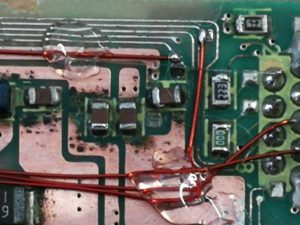 This chip controls all drives, leds, queries sensors, etc. It is also responsible for ejecting the cassette compartment. It controls a driver IC (bridge) via pins 20 and 21, which in turn supplies the charging motor. And exactly the two outputs remained at 0V. When the „Eject“ button was pressed, only a few millivolts were measured instead of the 5V. So at first there was a suspicion that the driver IC has an error and is pulling down the outputs of the controller. So the outputs from the controller to the motor driver were separated and 5V directly connected to the motor driver input – and lo and behold, the loading motor was activated. So the problem is with the 80116. After some back and forth I was able to find one of these and exchanged it. Another test pleased me, because the cassette could be loaded again and the head drum started.

And the next problem already appeared. One of the two loading arms only drove half off and then got stuck. That means I also have to disassemble the mechanics of the drive. Said and done. Fortunately, it was only a small bolt that holds a drive lever. This had loosened and slipped out. So the problem was quickly resolved. Now I was finally able to do a function test again. And this time everything worked. The cassette was loaded, the head disk started, the tape was threaded and finally it could be played. After I had tested all functions, the GV-8E can be reassembled. Now he can go to the showcase as a „museum piece“;) 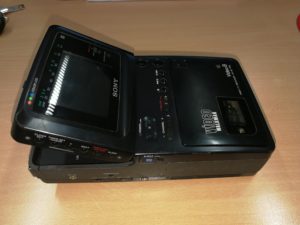