It is a clock with Type IV-11 vacuum fluorescent display tubes for hours, minutes and seconds, and an IV-18 tube for date display, and IV-3 for displaying the day of the week. The clock consists of a mainboard with power supply, CPU, MP3 module and driver blocks for the tubes. The time is set and synchronized via an externally connected DCF-77 receiver. Later, the board will be extended with a real-time clock circuit. The power supply for the entire circuit comes from a small plug-in power supply with 12V / 1.2A. The total power consumption is about 450mA. As a special feature, the clock has a small MP3 sound module with MicroSD card slot. This receives from the microcontroller via the serial interface every quarter of an hour a corresponding command to play an MP3 file. Thus the quarter of an hour is signaled with a „gong beat“, half an hour with two and three quarters of an hour with three „gong strikes“. At the full hour, the corresponding time is announced.

In the years 1968 to 1970, the radio receiver was built with the inscription „Philetta Euro 280“ by Philips. It is a small multi-band receiver with transistor equipment. The type designation 12RB280 / 30 with the inscription „Sonata“ seems to be another version of this model. In any case, I have dug up the version „Sonata“ – once again from the depths of the Kellergefilde – and after superficial cleaning connected to the mains. Immediately after switching on, the scale illumination lights up and a loud 50 Hz hum can be heard from the loudspeaker. Increasing the volume level adds some noise. So switched to the FM band and searched for a station – and lo and behold, it works. Only the buzzing disturbs. Otherwise, the device works without any major problems. To find the cause of the humming, you begin with the troubleshooting as usual in the power supply. 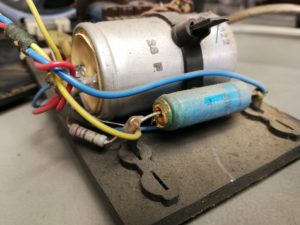 Immediately after switching on, even before I had the probe at the measuring points, a noise was heard without „humming“. The oscilloscope image now showed a clean DC voltage – almost no ripple. The receiver worked again very clean, without disturbing background noise. That was apparently the only mistake.